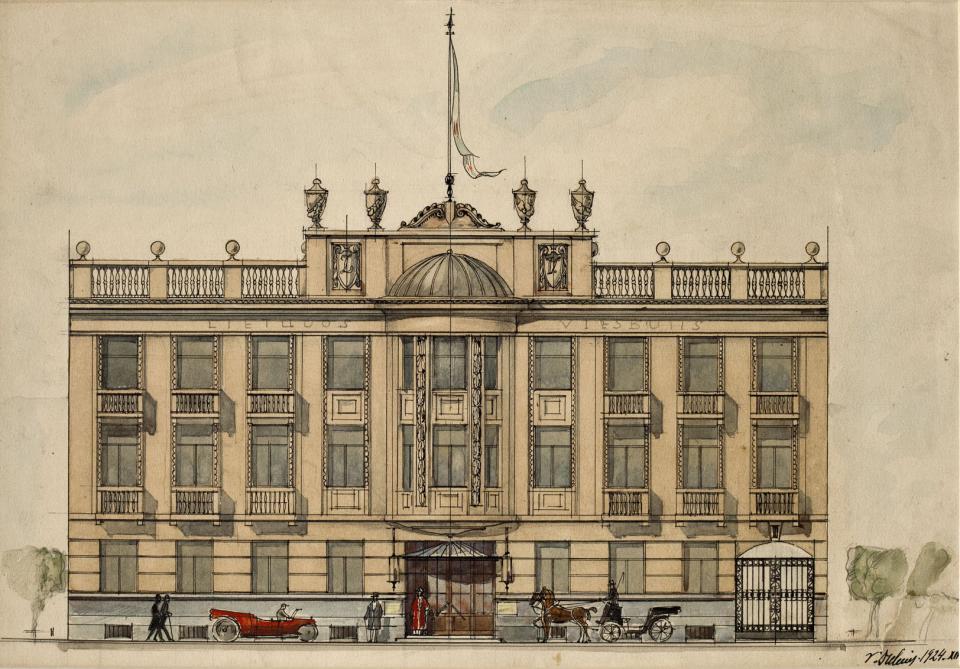 Signature: V Dubeneckis. 1924.XII  (in the bottom-right corner of the painting).

The hotel design by V. Dubeneckis is a benchmark of a posh, modern, and European hotel just as it is an example of the local, Lithuanian national, style. The building’s exterior is defined by moderate historical shapes and façade segmentation and artistic accents, the typical feature of V. Dubeneckis’s apartment buildings: symmetry, rectangular windows spaced at equal intervals decorated with tiny shallow baluster balconies on the first and second floor. The décor of the balconies is rhythmically mirrored by the baluster insertions in the parapet area. The widely glazed central entrance to the hotel is highlighted by the semi-circular bow-window spanning the height of two floors. The distribution and rhythm of the main façade openings is further accentuated by the bands of vertical and horizontal cornices. For both sides of the central band of windows, the architect had designed, in keeping with the ‘national style’, garlands of ‘oak leaves’ (he had already used ‘tulip’ garlands on the façade of the Ragutis house once). Eventually, during construction, this ‘national style’ décor was replaced with ‘clean’ bands of vertical cornices – most likely due to how narrow the band is. The top of the central part of the façade is decorated with an attic with two sculptural cartouches in the shape of LV, the monogram of the Lietuvos viešbutis (Lithuanian name for the Hotel Lietuva). Right in the middle of the building, the historical composition of the façade is crowned by a tiny neo-baroque fronton with a flagpole and 4 ‘vases’, two on each side of the flag. The relief ‘tulip’ ornament framing the monogram of the Hotel Lietuva appears rather more often in the interior than it does on the outside, and is particularly abundant in ceiling mouldings.

The Lietuva Hotel, designed by VLADIMIRAS DUBENECKIS (1888–1932), was one of the first new buildings in Kaunas. It served to accommodate important foreign guests. The Neobaroque style was chosen for its faēade, as a symbolic reminder of the Baroque architecture that had made Vilnius famous. At the same time, decorative ethnographic elements, such as tulip motifs and herringbone patterns, and other motifs from folk textiles, featured in the building’s exterior and interior.